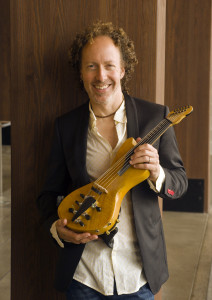 TRACY SILVERMAN, ELECTRIC VIOLINIST & COMPOSER:  Lauded by the BBC as “the greatest living exponent of the electric violin”, Tracy Silverman’s groundbreaking work with the 6-string electric violin defies musical boundaries. The world’s foremost concert electric violinist, Silverman was named one of 100 distinguished alumni by The Juilliard School. Formerly a violinist with the innovative Turtle Island String Quartet, Silverman has contributed significantly to the repertoire and development of what he calls “21st century violin”, the 6-string electric violin, on the concert stage and in contemporary music, inspiring several major concertos composed specifically for him, including Pulitzer winner John Adams’ “The Dharma at Big Sur”, premiered with the Los Angeles Philharmonic at the gala opening of Walt Disney Concert Hall in 2003 and recorded with the BBC Symphony on Nonesuch Records with Adams conducting. Legendary “Father of Minimalism” Terry Riley’s electric violin concerto, “The Palmian Chord Ryddle”, was premiered by Silverman with the Nashville Symphony in Carnegie Hall in 2012 and recorded by Naxos Records, and Kenji Bunch’s “Embrace” concerto was co-commissioned by 9 orchestras and premiered by Silverman in 2013. Silverman’s 2014 recording for Delos/Naxos Records, “Between the Kiss and the Chaos,” features the Calder Quartet collaborating on Silverman’s 2nd electric violin concerto of the same title. The Chicago Tribune’s John von Rhein hailed Silverman’s “blazing virtuosity” and The New York Times’ Anthony Tommasini admired his “fleet agility and tangy expressivity”. “Inspiring. Silverman is in a class of his own.” –Mark Swed of the LA Times. The 2015-16 season will include a return to Carnegie Hall for the premier of another electric violin concerto, Nico Muhly’s “Seeing Is Believing”, with the American Symphony. Silverman tours internationally as a soloist with orchestras, with his one-man performances, and as a collaborator with many other artists and chamber ensembles. Tracy teaches at Belmont University and lives in Nashville, Tennessee.