SCORE-COM 2017 IS POSTPONED
DUE TO UNFORESEEN CIRCUMSTANCES SCORE-COM 2017 HAS BEEN POSTPONED UNTIL LATER THIS YEAR.
WE APOLOGIZE FOR ANY INCONVENIENCE THIS MAY HAVE CAUSED.  EVERYONE WHO HAS BOUGHT A TICKET WILL RECEIVE A FULL REFUND.  PLEASE CHECK BACK ON THIS PAGE FOR RESCHEDULING INFORMATION. 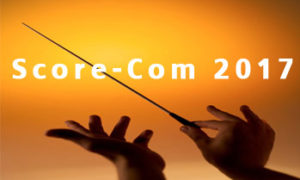 Networking event in the evening

In Game Music Bootcamp you will learn about all aspects of game music in this two day course. You’ll learn everything you need to know about non-linear scoring, integration, writing techniques, working with supervisors and even contract pointers from game industry veteran Alexander Brandon. Writing session demonstrations will be using Steinberg’s Nuendo, but practical techniques can be used for any DAW (Pro Tools, Logic, Reaper). In addition you’ll see integration techniques with Audiokinetic’s Wwise, and game engines Unreal and Unity.

All symposium attendees are invited to a Film-Com networking event on the evening of TBA – details will be provided to all paid attendees.  Heavy hors d’oeuvres will be provided.  Feel free to bring your business cards, demos, or any other promotional materials!

DEADLINE: To receive your all-access Film-Com laminate, you must register by TBA.

Alexander Brandon is a game audio veteran with twenty years of experience and over fifty titles to his credit, among them the soundtracks for such hits as “Unreal” and “Deus Ex”, and more recently music, sound and voice for such games as “Torment: Tides of Numenera”, “Wasteland 2”, “Alpha Protocol”, the “Neverwinter Nights” series, “Bejeweled 3”, “Skyrim” , and “DC Universe Online”.

He has also worked with Hollywood voice talent, symphony orchestras, and high profile music acts such as BT. Alex continues to write on numerous game audio subjects, and is always honoring his roots, interviewing such Japanese game music rock stars like Hip Tanaka and Tetsuya Mizuguchi. As part of the game audio community he has served on the steering committee of the IA-SIG and as Vice President of the Game Audio Network Guild.

He now runs the audio production house in Georgetown, Texas, “Funky Rustic”, with his wife, Jeanette, and distributes music through Bandcamp and Soundrop, releasing an album every now and again.